How To Get Those Crisp Stencil Lines

Have you seen some of these painted signs that look like they were painted on freehand? The lines are so crisp and clean. Surely they didn’t free hand that? In some cases they did, there are those talented, beautiful people out there that have amazing handwriting and can free hand cursive onto just about anything; but for the non-freehanding, beautiful people out there, there has to be some help for us too. And there is! Today, I’m going to share with you a little tip that I did not create, but rather discovered via the internet for stencils.

I have seen this idea going around for a few months now, and was a little hesitant to try it. Anytime I make a painted sign, I do like it to be as authentic as possible, and I had this idea in my head that if I used anything to “help” the process that somehow it lessened the home made value. Crazy I know, but that’s how my brain works.   Even in my DIY classes that I host, we experience the occasional bleed under our stencils. We usually wait until the paint dries and pass around the “tool” and scrape off where the paint has bled under the stencil. In these classes, I want the ladies to feel empowered by making something special all by their self, so I keep our process as basic as I can.

So here’s the little tip….Modge Podge…..Yep that old fashioned stuff we used in school for craft projects. I made a sign over the weekend for a customer and after using the Modge Podge, she thought I had used vinyl for the lettering on the sign. Nope, no vinyl for this project….just me, the stencil, chalk powder paint and my new painting friend…Modge Podge. So here’s how I used it to made those crisp lines. The stencil I made had very thin cut out lines on it, so I just dipped my finger on the lid of the Modge Podge and rubbed a thin layer over the entire opening on each letter.

Then, because I used contact paper as stencil material, I grabbed my heating tool and took a few passes over the Modge Podge. The craziest thing happened between the heating tool and the contact paper…..it made it shrink and adhere to the wood more so, than just the stickiness of the backing. You know when you wrap a basket with that clear stuff, then heat it up? It shrinks to the basket! Well that’s what happened to my stencil….pure magic and brilliance. I applied the paint then ran the heating tool again over it because, well I’m impatient and wanted to see the finished product. After the paint was dry, I carefully removed the stencil and voila perfect lettering. I can promise that I will be incorporating this simple, little step into every painting DIY class I host. Who would have thought?!?!?!  I seen it, but did not believe it would work as well as it did.  I’m hooked on using the magical white paste in a jar.. Modge Podge!!

So there ya go…my new secret weapon for stencils!  You just have to trust me on this and go grab yourself a jar!

Have a fabulous week! 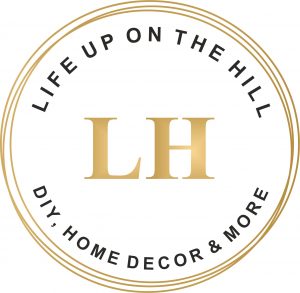